Flipkart has been one of the fastest growing ecommerce companies in the world. In the 8 yrs since its inception, it has grown leaps & bounds.  This year alone, it has had a record sales growth of 150%. With a recent funding of $700 million, the company is now valued at $15 billion. From a two member team to a whopping 35,000 member team, people have been the key to Flipkart’s massive growth over the years and Mekin Maheshwari has played a major role in this journey. 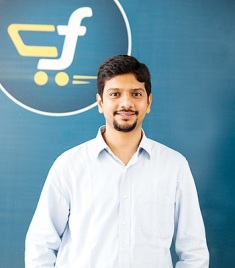 During 2008- 2009, the startup eco system was not as busy and buzzing as it is today and not many venture capitalists invested actively in India. The technology leaders were unwilling to make a switch to an ecommerce startup. However, Mekin believed in the vision & entrepreneurial spirit of Flipkart and hence joined them as their Head of Engineering in 2009. He was part of the core technology team of Flipkart that built the foundation of Sachin Bansal and Binny Bansal’s vision. Prior to this, he had spent several years in companies that fostered entrepreneurial spirit.

I believe, Mekin played “The Wall” role at Flipkart – He donned many hats at Flipkart, to account the evolving organisational needs – similar to Rahul Dravid, The Wall of Indian cricket. After heading the engineering vertical for about three years, he took up the challenge of heading Payzippy and Ebooks products as the Business Head.  In 2013, from managing products to businesses, Mekin then moved to managing the most important asset of Flipkart- its people.

I think managing people is harder than it sounds; this involves the ambiguity of human emotions, which he has effortlessly overseen in the last three years. This demonstrates one of his strongest traits of leadership, i.e, selflessness. He had let go of his passion in technology, to manage human resources, for the benefit of the company. Together with his team, he has not only attracted the best of global talent, but also, successfully retained the core team, of strong technology professionals at Flipkart.

I re-collect a leadership hiring experience in the year 2010. Mekin rejected a candidate on the grounds of the candidate not believing in Flipkart’s vision of $1 Billion valuation. Initially, I felt Mekin was being too picky. At the same time I realised that Mekin is most keen on values and beliefs. It was later that I understood, he was right in that hiring judgement. Strong Leaders possesses strong intuitions.

Gajanana Hegde, VP, Hortonworks who worked with Mekin at Yahoo, notes that “Mekin is sharp, intelligent and high on ethics”. Like Gajanana Hegde, many industry leaders applaud Mekin’s work.

Ex- employee, Vidya Bharath, Senior HR Manager, Flipkart, who closely worked with him, believes that he is a born leader and an extremely tolerant person. She remarks, “His positivity is very contagious. He motivates the team to stay focused always”.

“His problem solving abilities and cool headedness have helped us several times to get out of tricky and complex situations. He possesses great leadership and organizational skills which he displayed ample number of times” says Ravi Prakash Putchala, who worked with Flipkart as Engineering Manager in the year 2010.

I hope other start-ups get to hire people like him, who can stand by the founders and scale up their companies. He is one of the key organisational architects of Flipkart. With such rich knowledge, experience and the seal of approval from the leaders in the tech circle, Mekin is clearly “The Wall”. Here’s wishing him all the very best on his new journey addressing the needs of the social sector.

Here is a sneak peek to the Wenger & Watson's official blog